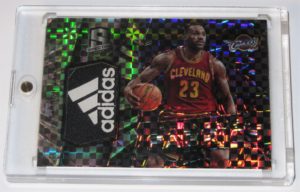 I originally collected sports cards (namely Basketball and AFL cards) back in the early to mid 1990s when things first started to boom for NBA cards. Like most people I dropped off in the later 90s and really only bought a box or pack here and there over past few decades. In around May 2016 I purchased a few boxes of 2015-16 Prizm and was hooked again. I entered in my first NBA group break with a local breaker here in Australia in June 2016 where I got the Raptors and a couple of nice little hits. The real tipping point for me was when I hit the below 15-16 Spectra LeBron James 1/1 Adidas Tag in only my third or fourth break. It’s since made its way to an avid collector here in Australia but from there on I was hooked!

The idea for this website originated when I first got hold of a couple of redemptions and wanted to know if they had already been fulfilled or not. I did a web search looking for a database or something only to find that there wasn’t one and the idea of searching through every Panini redemption update did not appeal to me. So coupling that idea with an interest in learning web design I set about developing a database for the redemptions that could easily be searched with a suitable web based front end to access the database. Once I finally managed to get that to work, a friend pointed out that I might need more content to make the site relevant to collectors. This is when I decided to add the Checklists and Set Info pages. The idea behind the Set Info pages is to provide collectors with a clearer picture of each set with regards to teams and players. This way they can tell if the team or player they collect have any particular cards they would like to obtain before buying packs, boxes or entering a group break. I added the Player Checklists after someone in the community suggested that it was something they would like to see.

All in all it took around 2 months to develop before this site went live and I am constantly updating it, adding new redemption updates and checklists, as well as looking for new ideas and ways to provide relevant information back to the collecting community. In time I hope to include products from Manufacturers other than Panini and Select (AFL) including Topps, Upper Deck and Leaf. Depending on how life goes, I may be able to eventually consider expanding the site beyond sports cards and to include trading cards or other varieties like Pokemon, YuGiOh etc…

My aim for this website is to make it something that the collecting community helps develop based on their ideas and suggestions. Please feel free to pass on any thoughts you have via email, Twitter or Facebook as detailed on our Contact Page.

Thanks for stopping by!